In 2006, Trans4m was co-founded by Professor Ronnie Lessem and Professor Alexander Schieffer in Geneva, Switzerland. Having worked and lived – among themselves – on literally all continents, Ronnie and Alexander recognise not only the uniqueness of each individual’s potential, but also of the particular genius and inimitable contribution of each society.

Aspiring to live an integral life in the service of the integral development of humanity, I see myself simultaneously as a transformative educator, engaged activist, passionate community builder, integral philosopher,  and spiritual poet.

Born in Germany, I studied economics, business and social sciences at the University of St. Gallen, Switzerland. My doctoral thesis, also at St. Gallen, addressed new styles of individual and organizational leadership (“Führungspersönlichkeit”), with a particular focus on personality development.

In my young adulthood, I began exploring the world, extensively – initially, during my university years, with internships in Mexico-City, Buenos Aires, Singapore, Paris and New York.  It is during those years that my understanding of the rich cultural diversity of our planet began to strike me as an incredible treasure and a key to the healthy development of humankind. I began work life in International Investment Banking in Frankfurt, and then in Media & Communication with the media giant Bertelsmann in London. From there I moved to Singapore where I co-founded and built up First Asia Publishing into a leading special-interest publisher. In 2002, my co-founder and I decided to sell the company to a Chinese media conglomerate, as I increasingly felt a need to participate in addressing the transformative challenges of our time.

From this point onwards, I pursued my passion of bringing about transformation in the economic, social, cultural and spiritual sphere. Together with Ronnie, we established the Trans4m Center for Integral Development in 2006.

Core to my motivation to co-found Trans4m, is my belief that an integral perspective to life holds a key to the survival of humanity and planet. Applying such a perspective, in locally relevant and resonant ways, can bring solutions to humanity’s most burning issues, and provide a viable platform for the imminent and necessary evolutionary leap of our species.

In addition to co-creating a new integral knowledge and practice foundation,  another particular interest of mine is to bring out and work with the uniqueness of each person, each context, and each culture. Driven by a the guiding image of “unity in diversity”,  I continuously seek for the most transformative educational space to nurture the full potential of participants, their communities and organisations. Education, to me, is hence not a means in itself. Rather, education needs to be related to the potentials and challenges that we encounter, locally and globally. Its role is to stimulate continuous personal and collective transformation in service of sustainable livelihood, as well as sustainable organisational, community and societal development.

A published poet, I am deeply immersed in developmental psychology as well as in many of the world’s wisdom traditions. I am married to – and frequently work together with – peace-builder and poet-performer Dr. Rama Mani. We live in the French countryside, near Geneva, where we are building up the “Home for Humanity”, serving also as the main global seat for Trans4m. We are proud parents of our son Arjuna, who studies liberal arts and philosophy at the Erasmus University College in Rotterdam, Netherlands.

Touched throughout my work and life by particular individuals, enterprises and, most especially whole societies, that are inhibited from making their unique contribution to the world, I continually seek, with others, to recognize and serve to release their personal, institutional and societal genius.

In my own being, I see myself as an Afro-European, embodying the “South” and the North”, societally, while my wife Joey, as a practicing psychotherapist, bridges the worlds of feeling and thought, individually. As our son Gabriel, now living in Israel, seeks to further our secular Jewish heritage, our daughter Talya, as a German teacher, ensures that our central European heritage lives on, indeed renewing itself through our bi-lingual grand-daughter Saana, who embodies life to the fullest.

Born in Zimbabwe of Central European parentage, as a young boy, I can vividly remember walking down the family business’ factory floor, a factory with a thousand African machinists, and none of them ever smiled. For those who have had the good fortune to have met the warm and sunny black Zimbabweans, perhaps the most friendly people on earth, that young boy was nonplussed. I just could not make sense of it. Ten years afterwards, at the age of 17, I can remember retrieving from a dusty school library shelf, a red London University prospectus. I turned to a previously untouched page, headed Industrial Psychology, and said to my parents, this is what I wanted to make of my life. Of course nobody in Zimbabwe, including myself, had heard much of industrial psychology at the time. So my father consulted his trusted friend and then Rhodesian Minister of Finance, Cyril Hatty, who pronounced “young Lessem, psychology is for back room boys”. From then on I was determined to bring the psyche not only of the person but also of an enterprise and of the whole society into the front room of business.

I started in my youth studying economics, and business studies at the University of Zimbabwe (BSc Econ in Economic Principles), the London School of Economics (MSc in Economics of Industry), Harvard Business School (MBA in Corporate Planning) and City University in London (PhD focused on action learning and enterprise development).

I initially worked as a Corporate Planner and subsequently as Managing Director of a chain of supermarkets, both in South Africa, before becoming a business academic based in the UK, Switzerland, South Africa and Zimbabwe, as well as an international management consultant. His major clients were such multinationals as IBM, Shell, Esso, and Unilever. At the same time I co-founded URBED – Urban and Economic Development Group – in London, focused on community economic, and enterprise, development.

Since the 1980’s, moreover I have written some 30 books on self, enterprise and societal development, focused on Africa, Asia, Europe and American in turn. Aside from the books published jointly with Alexander Schieffer, I have written, together with kindred spirits from Africa, Asia, Europe and America, Integral Community (Gower, 2013), Integral Polity (Gower, 2014), Integral Advantage (Gower, 2015) and The Integrators: Beyond Leadership (Routledge, 2016). My primary orientation though, as co-founder of Trans4m, and together with Alexander and our Trans4m community, is to further promote community activation, while awakening individual and collective consciousness, and to co-evolve innovation driven, institutionalised social research centers, most especially in the “Global South”. These are invariably aligned with transformative enterprises and transformative educational establishments. 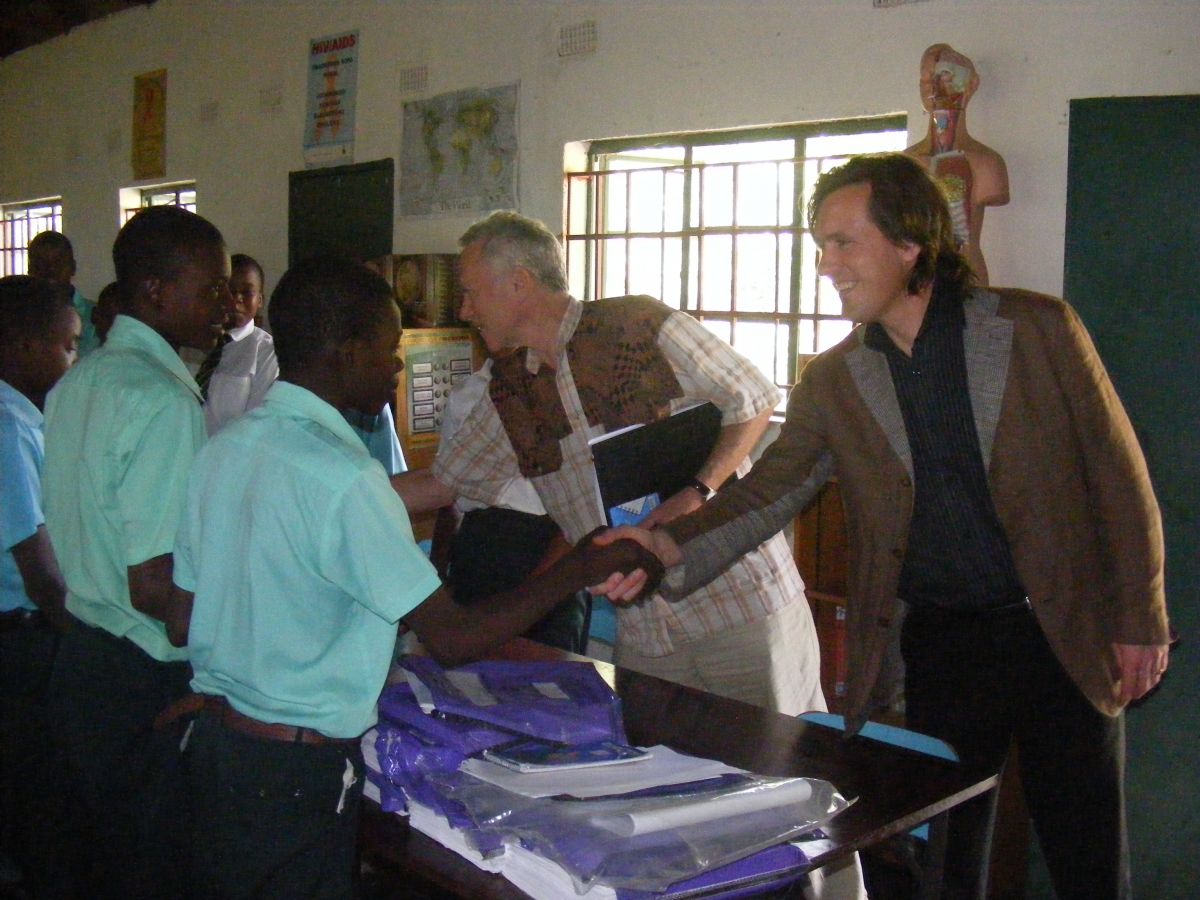 Alexander and Ronnie with a school class of St. Vincent School near Harare, Zimbabwe, where children shared how they worked with Integral Research