A groundbreaking book series by Routledge (Gower), co-edited by Ronnie Lessem and Alexander Schieffer, that introduces specific societies on their way to becoming “integral” and “green”.

This pioneering series introduces specific societies on their way to becoming “integral” and “green”. While there is a profusion of commendable books with “green” and “integral” credentials, they tend to be lacking in one or other of three major respects.

Firstly, they often focus on the ecological and technological aspects of “green” and are, hence, not fully “integral”. By integral, series editors Ronnie Lessem and Alexander Schieffer mean not only nature and community, but also culture and spirituality, science and technology, politics and economics – altogether forming an integral, systemic whole.

Secondly, the integral books that have appeared, often either American or European, tend to be culture-free. In other words, they assume that the ideas advanced could apply anywhere in the world, whereas Lessem and Schieffer’s Integral Worlds approach takes account of the particularity of each society, or region, whereby one complements the other.

Thirdly, the increasingly popular notion of “integral” is generally associated with the approach of US American Ken Wilber. While the editors acknowledge Wilber’s outstanding work, their own integral orientation goes beyond it, drawing on integral interpretations and applications of the entire world – south, east, north, west and center.

Building on these three premises, each volume of this series aspires to tease out the unique path of a country or region towards an “Integral Green Society and Economy”. Each volume is built around a locally anchored, collaborative research-to-innovation process that resulted in new “integral green” theory and practice. In this spirit, each society contributes its own “integral green” uniqueness to an “integral green” world-to-be. 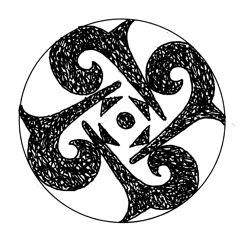 The circular fourfold artwork for the front covers of our book series has been designed by internationally renowned Slovenian artist, UNESCO peace artist 2016 and author Marko Pogacnik.  Pogacnik who is also a member of Trans4m’s Global Wisdom Council, calls it a “cosmogram”. The design follows the basic fourfold scheme of the integral approach underlying this series. It shows an ethical matrix at the centre and the four elements of manifestation around it. The matrix is built upon a transforming process: black square within the white one and the white one within the black. It signifies that the transformation process needs to evolve around the focus point at the centre. The manifestation plane shows an association with jumping dolphins. The straight lines of their dorsal fins repeat the square pattern of the matrix. What is inside is brought outwardly in a playful (creative) way. Perfect symmetry is purposefully avoided not to suppress the vitality of the cosmogram – and of course, the vitality that is required to bring forth Integral Green Societies and Economies.