“Sustainable eco-systemic regeneration translates to the repair of a fractured society and disturbed environment to a movement towards integration, cohesion and progress underpinned, in Zimbabwe’s case, by the overarching values and spirit of Ubuntu to which we are all enjoined to belong.” 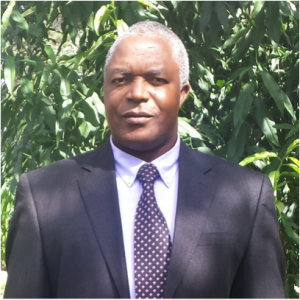 Born in 1960 in Chivhu, I am the 6th child and 2nd son in a family of nine children. My parents were devout Christians who expected their children to observe the morality and teachings of the Christian faith.

At the tender, age of 15 and when I had just completed my Form two, I was lured to join the liberation struggle alongside Zanla forces. I had been influenced in this decision by the injustices of the colonial settler regime which regarded blacks as inferior beings and apportioned the best land to the minority white settlers – a practice that also affected my parents.

After Independence in 1980, I, now Mazorodze (calmer or peace maker) briefly attested into the Zimbabwe National Army(ZNA) before resigning in 1982 to pursue academic studies that I hoped would help me contribute more meaningfully towards the economic emancipation of the country – my other struggle. In 1987, I completed a BSc degree in Chemistry and Biochemistry with the University of Zimbabwe and was soon engaged by Astra Corporation as a management cadet. I quickly rose through the ranks to become the General Manager of the biggest paint manufacturer in 2006.

In this position I came face to face with the challenges of a declining and fast eroding economy that threatened the survival of the company and its employees. Rather than surrender to these challenges or flee to the Diaspora, as was fashionable, I chose the alternative of helping to turnaround the situation. In the process I was to be exposed to the links between individual (leadership), enterprise, industry/community, industry and economy. I also realized that a holistic approach to renewal and sustainability at the enterprise level, required an attention at all the other levels and as fate would have it I felt a strong desire and determination to be involved.

In the course of this and other activities I was to be involved in the following capacities: Chairman of the Paints and Inks subsector, National Chairman of the Chemical Industrial Cluster, Council Member of the National Employment Council, and, President of the Mashonaland Chamber of the Congress of Zimbabwe Industries (CZI). I am also the current (2016) Chairman of the Industrial Associations chairpersons, and council member of the CZI. I have a wide experience in the surface coatings industry and have acquired several professional and academic qualifications including the following: diploma in marketing (dip Mktng) , Associate in the Technology of Surface Coatings (ATSC), Executive Master of Business Administration(EMBA) and a PhD in the Management of Technology and Innovation.

My research to innovation project was titled, “The Integral Approach to Innovation for the Recovery and Sustainable Development of the Manufacturing Sector”. The focus of this work was the development of an Integral Industrial Ecology for Zimbabwe. This was a research to innovation that was initiated by an inner calling to alleviate the suffering of hundreds of employees whose fate I deemed was now responsible for. For this and for my family and others who depended on me, I had to innovate to ensure the company survived and continued to operate on a sustainable basis.

During the course of my  innovation journey, I was soon to discover that the fate of my company, and any other enterprise for that matter, was inextricably linked to the fate and vibrancy of the industry, economy and society in which it was situated. This applies more specifically to enterprises and industries that are located in vulnerable and emerging economies which are not mature enough to contain the vices of economic liberalisation under the guise of globalization. My research culminated in founding the model on industry ecology as a theory – and subsequent practice – by means of which Zimbabwe could rise from the ashes to command a leading position in the global community.