At the heart of OFIRDI Ofure Integral Research and Development Initiative (formerly ACIRD), dubbed “Pax Africana” and based in Nigeria, is a new integral African theory called Communitalism and an integral approach to healing – of people, organisations and society. 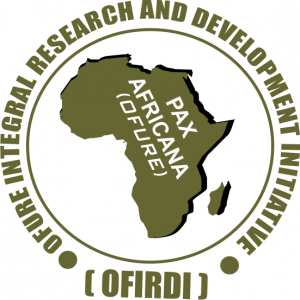 OFIRDI Ofure Integral Research and Development Initiative, nicknamed Pax Africana, has its roots in Paxherbals, an integral partner organisation of the Trans4m movement, dealing primarily with traditional African medicine. Out of an initial integral research process lodged in Paxherbals grew the idea of Pax Africana, a centre that explores healing beyond biological or physical health with a view to “integral healing”.

Founded by Father Anselm Adodo, OFIRDI develops research-to-innovation processes that lead to social innovation, in theory and in practice, while at the same time focusing on the systematic documentation and dissemination of such social innovation. Secondly, it continually co-evolves, together with others within and outside of Africa, its “home-grown” African approach to Communitalism, transcending the prevailing approaches to capitalism and communism, which have caused chaos rather than harmony, underdevelopment rather than development, in Africa.

One of the objectives of OFIRDI is to institutionalize and practicalize the theory of Communitalism, bridging the gap between research and innovation, between knowing and doing, and between community and university.

OFIRDI aims to establish new models for doing research in and for Africa. It seeks to assert the right of Africans to speak in their own language and metaphors, as expressed in line with the African proverb, “Until the Lion learns how to write, every story will glorify the hunter’’.

OFIRDI institutionalizes knowledge creation in and for Ewu village, Edo State, Nigeria and Africa as a whole via Communitalism, based on the four aspects of “Integral Healing” or Pax: Pax Communis, Pax Spiritus, Pax Scientia and Pax Economia, altogether called Pax Africana.

The uniqueness of the integral theory of Communitalism is its grounding in a particular, visible context. We call it a philosophy-in action, or research-to-innovation, a combination of indigenous (local) with exogenous (global) knowledge.

From 2017 onwards, the Institute of African Studies of Nigeria’s renowned University of Ibadan, in collaboration with OFIRDI and Trans4m is offering a Masters of Arts Degree Programme in Transformation Studies in Africa. Pax Herbals, Ewu, will be the key institutional role model for this Masters Programme, and students will be directly engaged in working with Pax Herbals.