An Integral Approach to Development Economics:
Islamic Finance in an African Context

by Basheer A. Oshodi (Nigeria)

Nigerian banker Basheer Oshodi links neo-modern economic theory with the practicalities of finance in a part of the World where poverty is rife, focusing on Islamic banking and finance in an African setting. 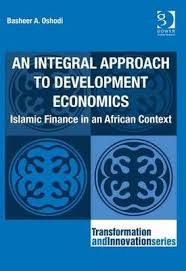 Developing economies such as those in sub-Saharan Africa are searching for realistic economic policy prescriptions. Despite economic growth in countries like Nigeria, poverty and unemployment blight the lives of many, in the midst of plenty. Simultaneously, much neo-classical economic thought is being questioned against the backdrop of global economic meltdown, giving rise to inquiry about more integral approaches to sustainable development.

In An Integral Approach to Development Economics, Basheer Oshodi examines modernisation theories, dependency theories, world system theories and emerging 21st century economic theories and links a neo-modern mix of economic thought with the practicalities of finance in parts of the World where poverty is rife. In a specifically African setting, over half of the population are Muslims, Oshodi considers Islamic finance in the context of the triple heritage of indigenous culture, Westernized Christianity, and Islam.

He argues that the principles of Islamic banking and finance can be integrated with other elements of that heritage, focusing on meeting the challenges of poverty and unemployment. Islamic finance is not just a religiously-oriented, Sharia-compliant, alternative financial model. It can contribute to overall socio-economic transformation and a wider, people-centred approach to economic development. International organizations, financial institutions, reserve banks, policy makers, donor agencies and students will find resonance in this valuable addition to the Transformation and Innovation Series.

“For Basheer, the only practical and institutionalised moral economic structure is Islamic banking and finance as embedded in the enlarged Islamic economic system. Hence, moral economics is built on the backdrop of Islamic business ethics, Islamic banking contracts, and Islamic banking value proposition within the realm of not just Shariah-compliance, but of poverty reduction. The book concludes by developing economic theories that are home-grown – from Africa. After reading Basheer’s book, I believe that it will be a valuable material and reference point for those engaged in academia, banking and finance, development matters, governance, and overall policy formulation. Basheer’s ability to capture the complexities of Southern economies is indeed intriguing. I strongly recommend this book which is undeniably an integral approach to economic development.“
Abubakar Suleiman, Chief Financial Officer, Sterling Bank plc, Nigeria