24 August 2017: As the American cultural anthropologist Margaret Mead once famously stated:  “Never doubt that a small group of thoughtful, committed citizens can change the world; indeed, it’s the only thing that ever has.” 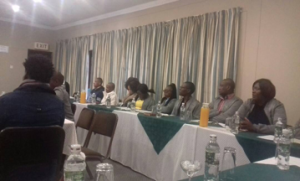 We can be the authors of the remedies to heal our land and bring smiles to our people.  We can bring back the days of plenty, using the basic gifts given to us by our creator, such as nature, spirituality, rhythm, ubuntu/unhu, and the spirit of pulling together as a people. The message is that we must go back to our traditional origins and re-visit our age-old African values – “I am because we are.”  First we must re-establish our roots and identity, become comfortable in our own skin as Africans and as Zimbabweans.  Once we remember who we really are in our indigenous context, in other words our Grounding, we will realise that we have the power to make a difference.  Our added strength will come from a combination of the indigenous and the exogenous, giving us the best of both worlds.

In fact Sarudzai Elizabeth Mamukwa, one of the opening speakers in the re-launch of Pundutso at the Bronte Hotel in Harare on July 28th, 2017, focused on evolving the integral enterprise, in its different manifestations ( Pundutso Hut below), taking on socio-economically from where ubuntu/unhu philosophically leaves off.  Such integral enterprise then, building on nature and community, culture and spirituality, science and technology, economy and all round polity, is manifested generally in Integral Farming (Best Fruits Processors), Integral Social Development (Weph Enterprises), and in integral enterprise as a whole (Providence Human Capital), as well as specifically in Integral Ubuntu Leadership(Kairos/Matupire),IntegralKnowledge(Mamukwa), Integral Ecology (Chinyuku) and Integral Marketing (Nyambayo).

Moreover, as revealed by Matupire and Mamukwa, cited in our (2) book on Integral Renewal, and in relation to the functioning of Pundutso as a Centre for Integral Development:

The decay in our moral values and the current socio-political and economic problems have been made worse by the erosion of our relational belonging as a people whose values were anchored on indigenous culture  and its philosophy of Ubuntu/unhu (I am because you are, and because you are, therefore I am).  Our Pundutso centre believes that any attempts at local-global renewal, within our southern relational context, must retrace its roots to the pre/formal tacit grounds of our society in order to anchor our developmental efforts on a secure and sustainable basis, with a view to tact/explicit a/formal, renewal, explicit post-formal consolidation, and ultimately integral effect.

Pundutso, in that light, is functioning as an umbrella organization to support the newly emerging Kuona Centre for Integral Enterprise, with Providence Human Capital (PHC) serving as an initial role model, altogether serving to advance the African Phoenix Rising.

This was further borne out by the incumbent head of Business Studies Faculty –   Ezekiel Guti University in Bindura, Dr Gift Mugano, who in his opening speech, cited in particular  (3) from “Samanayanga” Lessem’s (2015) book on Integral Advantage : Emerging Economies and Societies:

.. exchange and reconciliation within and between countries will increase local and global wellbeing if each country pursues its natural, cultural, social and economic advantage thereby exchanging knowledge and value with its potential trading partners, thus re-imagining free trade. With such exchange and reconciliation among nations, all countries, as a whole, will co-evolve by Catalysing development within and between each other, whereby specific local communities are Activated, innovation driven technological and social Research is duly institutionalized, and transformative Education instituted within and across each. Through such each country will actualize its individual societal uniqueness and thereby contribute to the integrated potential of the global whole.. We favour as such the pursuit of each country’s integral advantage, since it is presumed to be “welfare enhancing” in that the aggregate level of local and global wellbeing is thereby increased.

Samanyanga himself then highlighted how the integral worlds (integral realities – south and east, north and west; realms – nature and culture, technology and economics, rhythm – grounding, emergence, navigating and effecting; and rounds – self, organisation, society and world) that Trans4m (4) has developed, in theory and practice, over the last decade, have been born out of  a painful recognition. Specifically the “north-west”, politically and economically, has dominated the whole world, in the modern era, and while the “east” has been recently rising”, the “south” has been altogether left behind.

The “integral” approach, then, that Trans4m has conceived, seeks to bring together all these four worlds, starting with the “south”, as prior grounding. In that guise enterprise is recast (5) in such integral terms whereby “southern” community underlies “eastern” spirituality, and “northern” technology as well as ultimately “western” economy need to build on such. As a result is it community building rather than marketing; conscious evolution rather than human resources; knowledge creation rather than operations, and sustainable development rather than finance, that altogether gain pride of integral enterprise place, while also strategy and organization is altogether indigenously/exogenously renewed.

This then altogether set the scene for Chipo Ndudzo and Thomas Chibatebate, who, on the evening of July 28, in unveiling the Kuona Centre for Integral Enterprise, spearheaded by Providence Human Capital. For Providence, over the course of the last year, thereby:

In the next day, on July 29, we focused specifically on Providence Human Capital (PHC) as an African Phoenix Rising.

With 50 PHC people (part of team above) in attendance, including everyone from the executive team to the company’s messenger, drawn from all around the country, we started with team presentations on the emergent, integral enterprise.

Grounded in “Wellness”, Jane Vundla revealed how marketing was evolving, both within the company’s and also the communities that PC served, into ever more community building, serving to thereby build a healthy society.

Supplementing such, as revealed by Tendai,  and Peter, their approach to managing and developing SHEQ – Safety, Health, Environment and Quality – was mediated through the Trans4m GENE that is Grounding, Emergence, Navigation and Effecting in integral turn.

Emerging through Human Resource Development, Nkosi Moyo and Ranganai Chirima below have begun to consciously evolve the indigenous notion of ubuntu/unhu to inform the PHC approach to recruiting, developing and managing people.

The evolution of Operations into Knowledge Creation, via PHC’s Payroll function was interestingly illustrated by functional head David through the different knowledge creating roles he identified in his team, those of southern “Man of Steel”, eastern “Quiet Achiever”, northern “Technical Specialist” and western “Aggressive Operator”. These roles were ripe for further evolution, both within Payroll and in the company without.

Finally Harold Bhake, as head of finance, cast his eye on sustainable development, as we shall see by, together with Samanyanga that The Providence Way towards becoming an integral enterprise goes on.

To help along that way, after the above departmental presentations, and after Thomas  had reminded the attendees from PHC of the integral journey so far, Samanyanga introduced the Medlabs Laboratories from Jordan, in the Middle East, with whom Trans4m had been working over the past two years, and which was also becoming an integral enterprise.  Generally, and firstly, he referred to its stages of development, form pioneering (treating people well), to differentiation/scientific management (effective organization) to integration (building a healthy society).

Medlabs has laboratories in Jordan, Palestine, Kurdistan and the Sudan. With a view to becoming an integral enterprise it is introducing Care Circles (southern); a Re-orientation (eastern) program for all employees, to the integral enterprise; continuing education (northern) in relation to such; and an integral audit (western); while finally putting together a Medlabs Pulse book (centre), to depict their journey so far . Samanyanga then asked the PHC participants, in now four small groups, what might be an equivalent approach in their company. Although, in the limited period of time, a limited anount came out of these sessions, it did become apparent who would be willing and able to take the overall process of becoming an integral enterprise on. So Harold identified these people: Jane and Omega in relation to Wellness and community building; Nkosi and Thomas to cover HRD, Staffing Solutions and Conscious Evolution; David and Lloyd in relation to Payroll and Knowledge Creation; Kundai and David… to cover Sustainable Development. Finally Chipo and Harold would be encompassing the strategic and organizational renewal of PHC.

On the following day then, in the PHC offices, Samanyanga convened a meeting with those key people, also joined by Laqall who was doing an internship from the Africa University in Zimbabwe. While on the one hand confirming the abovementioned group of people to work with Thomas, Chipo and Harold to take the integral enterprise journey forward, on the other hand he identified a first major step. This was to be a depiction of what Chipo has now termed The Providence Way, modelled on what Medlabs have put together as their Pulse. Such a book was to be compiled by the above, masterminded by Thomas, and edited by Laqall under Chipo’s stewardship.

To ensure that Chipo’s all-important PhD underlies this PHD (Process of Holistic Development), given all her other priorities, we appointed Nkosi as Chipo’s research assistant. Not only then would she assist Chipo with her PhD on The Providence Way, but Nkosi herself,  by undertaking a masters in organizational psychology by research, would be focused on HR to Conscious Evolution, most specifically, thereby further evolving the ubuntu/unhu prospect, while at the same time uncovering the organizational dynamics involved in the whole developmental process.

Specifically then, and over the course of the next six weeks, the PHC group (provisionally entitled PHC/IE), as per Pixie, set in the wider context of the Kuona Centre, Pundutso, and the African Phoenix Rising, in ever widening circles, would be engaged in articulating The Providence Way,  likened to the Medlabs Pulse, thereby making explicit : 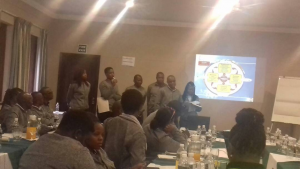 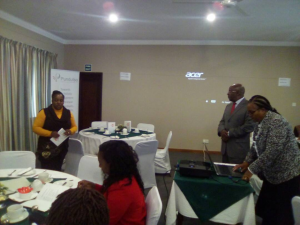 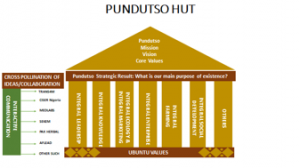 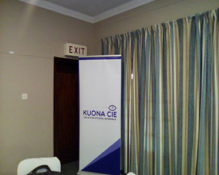 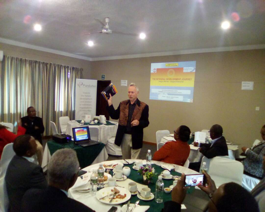 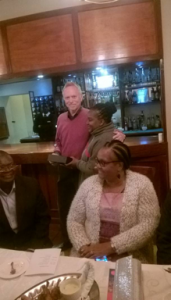 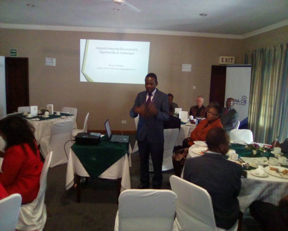 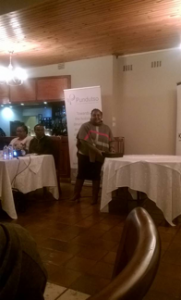