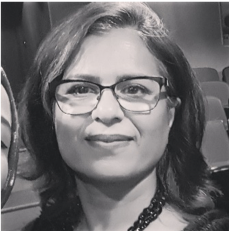 The book presents Akhuwat as a live example of reviving the Sunnah/tradition of Prophet Muhammad (peace be upon him) philosophy of Mawakaht (solidarity), thereof, looking deeply into many misconceptions and concerns regarding Islamic societies and how Muslim countries have failed to come up with their own localised solutions to socio-economic problems in dealing with poverty alleviation and societal development. Furthermore, this book explores, as per Aneeqa Malik’s personal call as to why there is so much disconnect between spirituality and enterprise development in the world today, and how a part of the Islamic world, in fact located in Pakistan, can be part of the solution rather than being central to the problem.

Furthermore, drawing from her Sufi knowledge of Islamic philosophy, Aneeqa postulates a new paradigm of solidarity which she terms as the Hikma (wisdom) of Soul-idarity transpiring from Akhuwat’s 4I’s genealogy, which in turn originate, ontologically, from Islamic fundamental doctrine of (Islam, Iman and Ihsan).

The concluding part of the book draws on the Hikma noesis further to transcend the intentionality of solidarity as per German Philosopher Husserl’s theory of ‘intentionality of consciousness’’; cognition especially when occurring through direct knowledge/intuition. 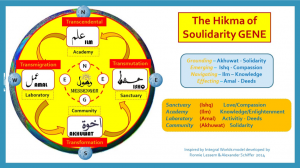 This book is a call-to-action for making the implicit nature of spirituality as a more practical apparatus to bridge this Self-societal divide. Along with posing some deep questions:

Could communities generate their own successive model of finances that befit their beliefs, as apparent via Akhuwat’s model of Solidarity Economy; could there be an awareness of the process, that gives birth to such models? Or is it, in the nature of Soulidarity to manifest itself through the process witnessed in Akhuwat’s ‘reciprocity’ paradigm?

Or could this reciprocity originated through the multiplier effect of Barakah (abundance) Rounds or virtuous circles as expounded by Amjad, sustain micro-communities? Conversely, could micro-communities (in need), generate their own micro-economies through self-sufficiency?

Integral Finance: Akhuwat is part of Routledge’sTransformation and Innovation Series. 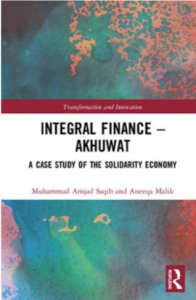