Tanweer (Enlightenment) Initiative in Jordan enters its next Phase, catalysed by a two-day integral workshop in Amman

10 May 2018: About 40 Transformation Agents from within Amman’s ASG/BSA Schools and from all sectors of Jordanian society joined a two-day integral workshop on “School Transformation to Societal Renewal”, driving the Tanweer Process forward. 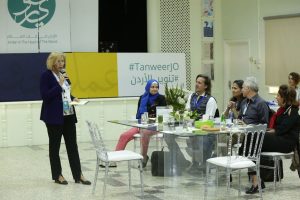 Chaired by ASG/BSA Principal and Senator Mrs. Haifa Najjar and catalysed by Trans4m’s co-founders Ronnie Lessem and Alexander Schieffer, participants engaged in a complementary process of advancing the Integral Education model and process of the (soon to be fused and co-ed) Ahliyyah School for Girls (ASG) and Bishop’s School for Boys (Workshop Day 1) and the Societal Renewal Process (Workshop Day 2) – jointly framed within the Tanweer (Arabic for Enlightenment) Initiative. This initiative had been officially inaugurated by ASG and BSA under the leadership of Mrs. Haifa Najjar, together with Jordan’s Minister of Education, H.E. Dr. Omar Al Razzaz, and other key members of Jordan’s society and in partnership with Trans4m in a widely recognized Tanweer Conference in November 2017. 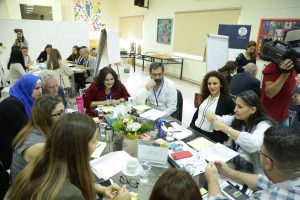 Tanweer is driven by the vision to actualize a new educational approach for Jordan, role modelled by ASG/BSA, that can serve as a driver for the integral renewal not only of the education system in Jordan, but also for societal and regional renewal in general. Such a transformatively oriented educational approach would actively engage in addressing the burning issues that society is facing, by promoting education and research processes, that drive social innovation, culturally and socially authentic for the region, and relevant for the world at large. 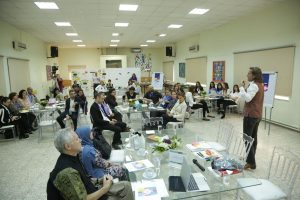 On Day 1, and based on an introduction into integral education and research by Trans4m, participants worked in interactive groups on the five integral themes that represent five key pillars of the emerging new educational model of ASG and BSA: from Enlightened Humanism (Center) to Community Engagement (South), towards Human Wellbeing (East) and Arab Liberal Education (North), to finally result in Innovative Learning (West). Groups reviewed achievements-to-date, that both schools been accumulated over the past decades, and articulated possible steps forward to evolve all the five themes. The collaborative spirit of the workshop was mirrored in the large number of active facilitators that help catalyse the small group processes, including Alia Al Husseini, Rana Shaban, Razan Jouaneh, Samar Dudin, Laila Abdul Majeed, Khalida Qattash, Kariman Mango, Feras Jabbour, Rania Hammoudeh. 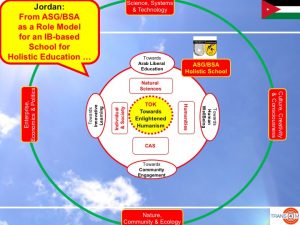 The five components of an integral educational model, carefully carved out of the aspirations of ASG/BSA and the requirements in Jordan and the region, then provided the foundations for Day 2. The day was opened by Trans4m sharing practical cases of communiversities from Africa, UK and Asia. The communiversity model was seen as the most viable framework and process to evolve the integral education model of ASG/BSA into a collective inter-institutional ecology for societal renewal in Jordan. We envisioned that such an ecology would comprise of four constituencies, namely Learning Communities, Spiritual Sanctuaries, Research Academies and Socio-Economic Laboratories. 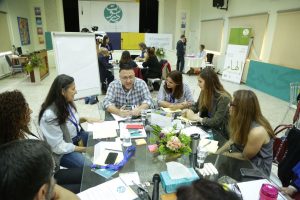 In close collaboration, these constituencies would serve to deeply anchor the Tanweer Initiative in society. By  bringing together key protagonists from ASG/BSA with leading institutions from Jordan and abroad within these constituencies, they together embody the most advanced knowledge and practice of the five core themes identified on Day 1: Community Engagement (embodied by Learning Communities, such as Ruwwad); Human Wellbeing (embodied by Spiritual Sanctuaries such as the Interfaith Studies Center); Arab Liberal (Emancipatory) Education (embodied by Research Academies such as ARD Nahda Arab Renaissance); and Innovative Learning (embodied by Socio-Economic Laboratories, such as MedLabs, EduNation, I-Learn etc.). The center driving Enlightened Humanism would need to be embodied by a core group, to be formed in the near future. 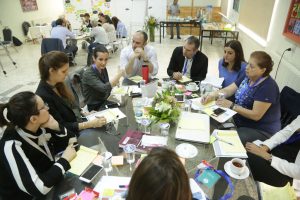 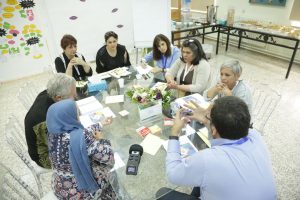 It was agreed that each of the constituencies would develop a full-fledged program for their particular theme (e.g. Community Engagement) – in each case through close interactive collaboration between the two schools and the participating institutions, jointly forming the Tanweer Ecology. 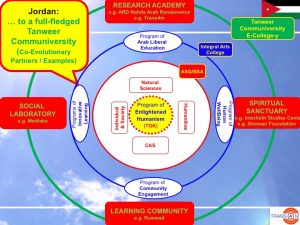 Such a society-wide innovation ecology can then create, in time, the ecosystemic environment for the launch of a future Integral Arts College in Jordan – and the programs developed around the five integral themes would form the curricula and transformative processes for such a fundamentally new tertiary education institution.

On Day 2 of the workshop five groups – under the skilled catalysation of Zina Khoury, Jamil Sarraj, Yazan Majaj and Samar Dudin worked intensely on developing initial outlines for such future programs, and on envisioning of future partnerships with key societal actors around all constituencies that could together form the Tanweer Ecology. All of the organisations present in the room – like MedLabs, Ruwwad, EduNation etc etc. – expressed great interest in actively participating in Tanweer; and many other close allies of ASG/BSA were mentioned. 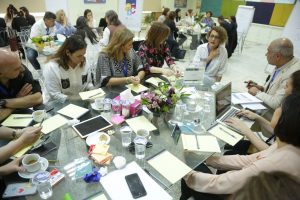 The presentations of the five groups showed an enormous resonance and strengthened the shared understanding of and commitment towards the new integral school and society model.

After two days of intense co-creation, Haifa Najjar, on behalf of ASG/BSA, and Trans4m concluded that a huge step in the Tanweer process had been undertaken. A follow up meeting will take place end of June in Amman to coordinate the further development of all five integral program streams, with a particular emphasis on Arab Emancipatory Education.

Watch this space for further developments …. 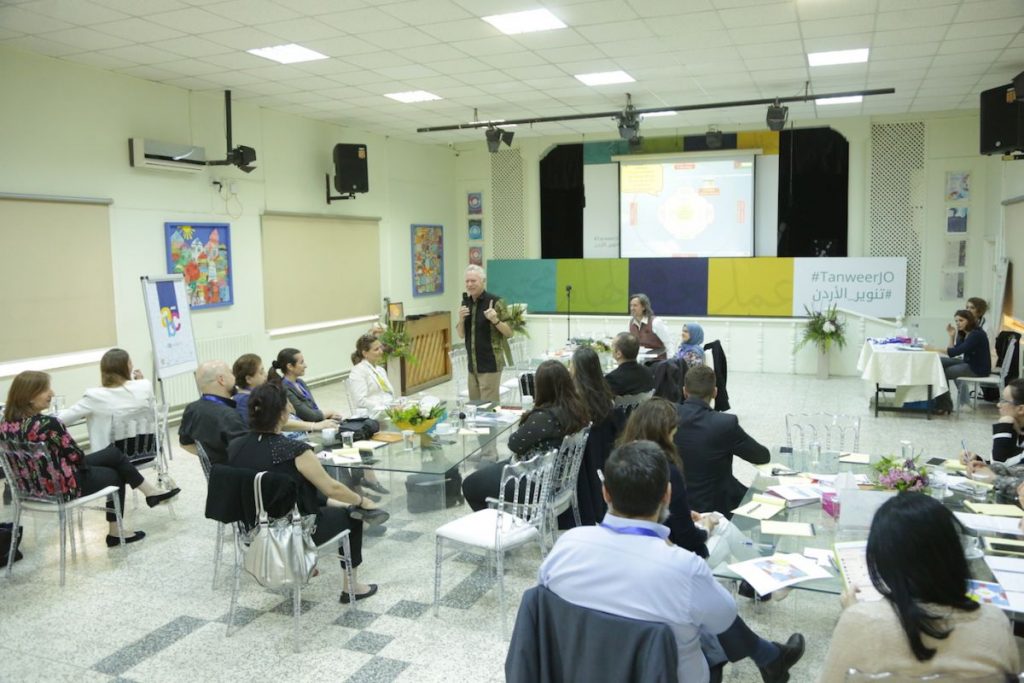 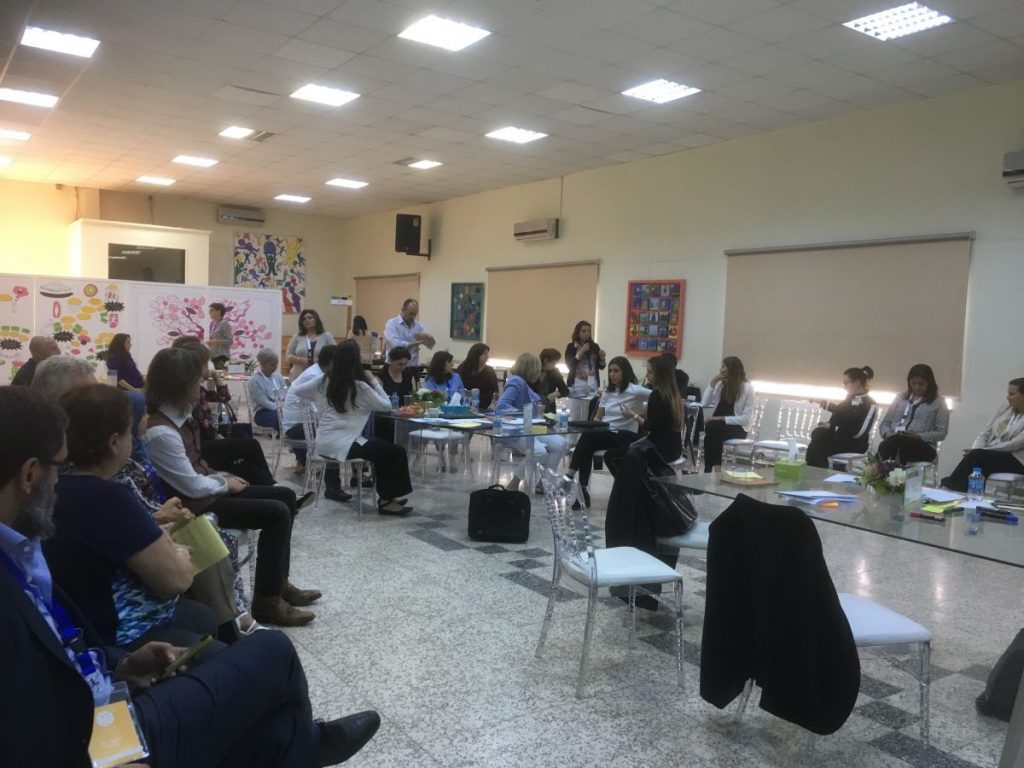 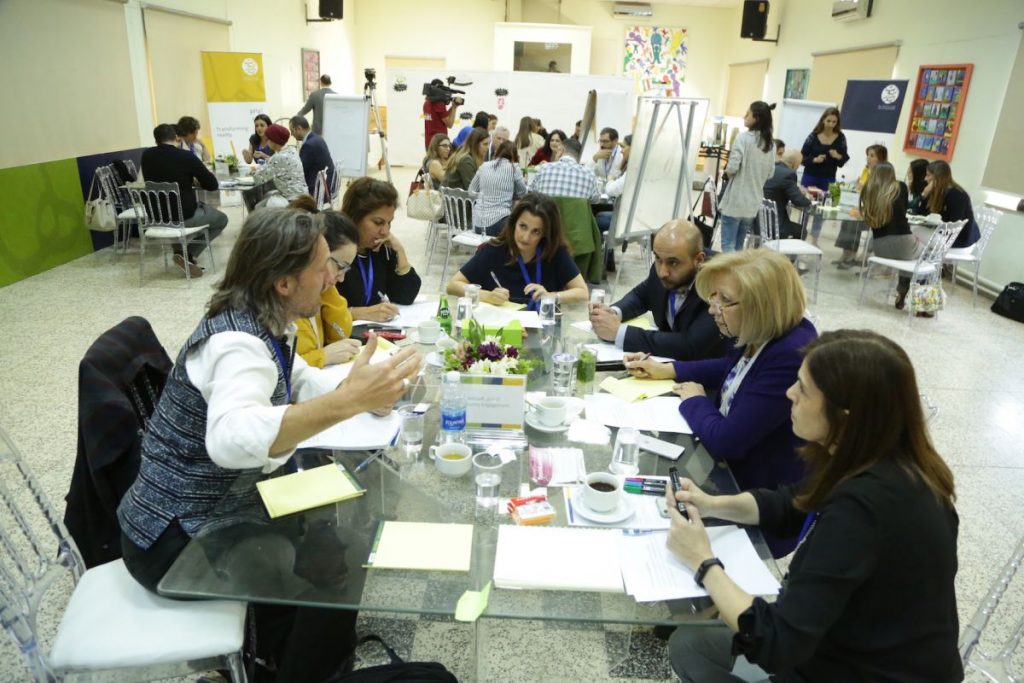 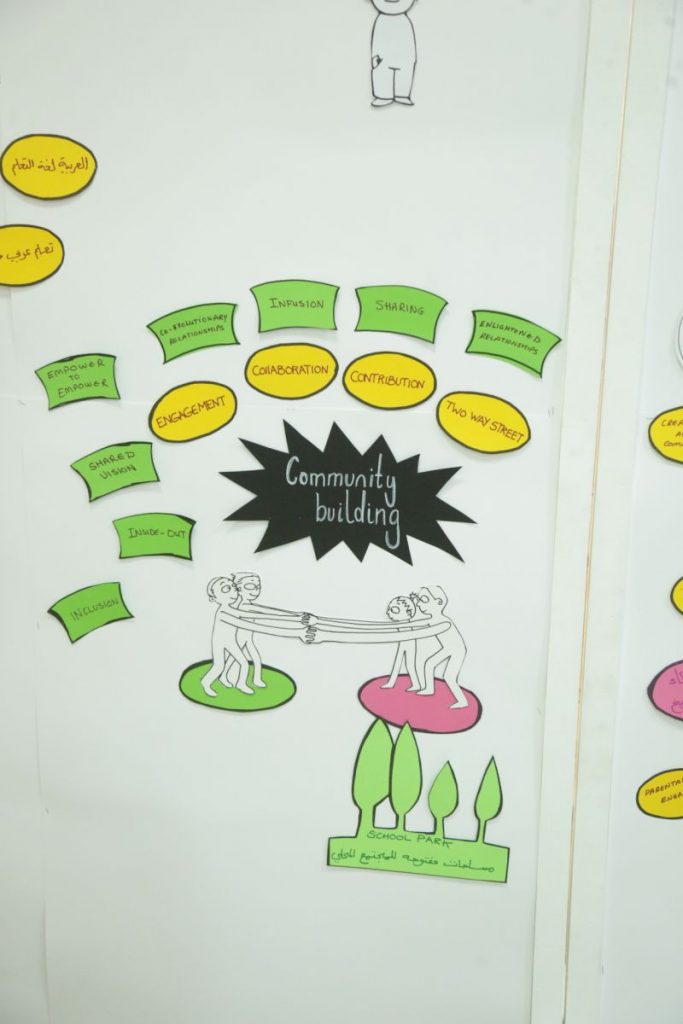 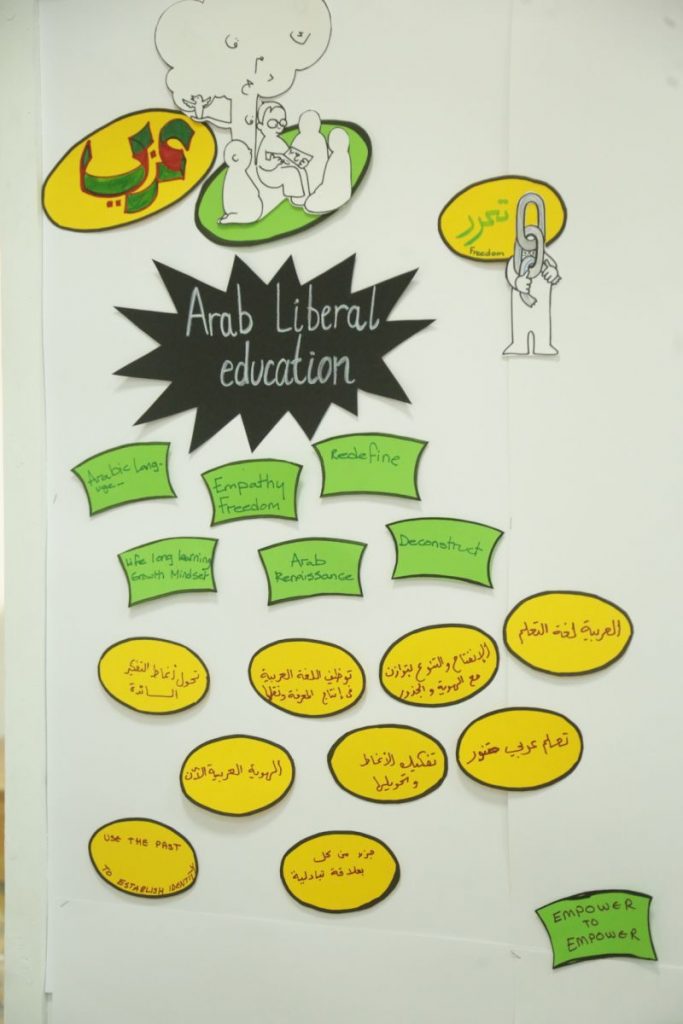 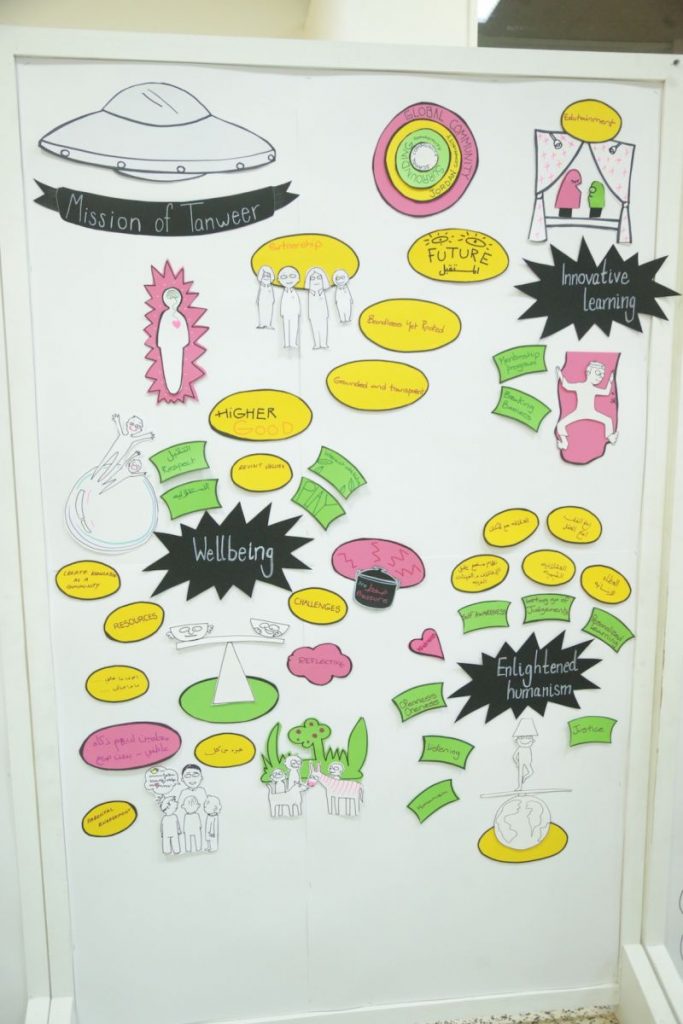 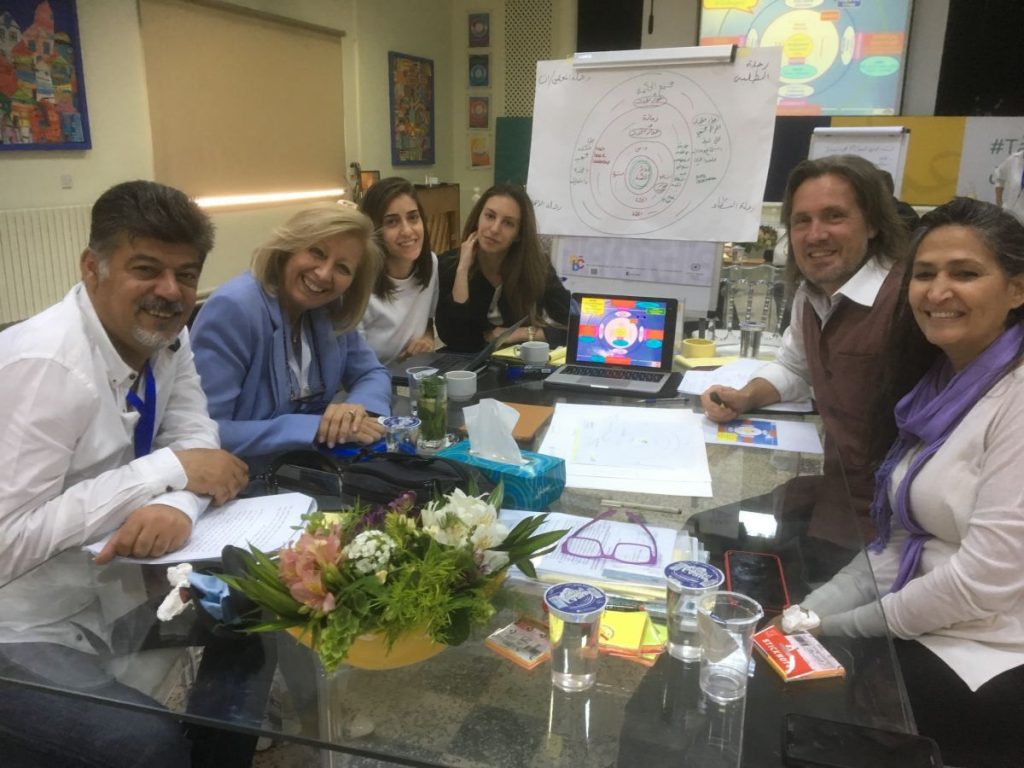 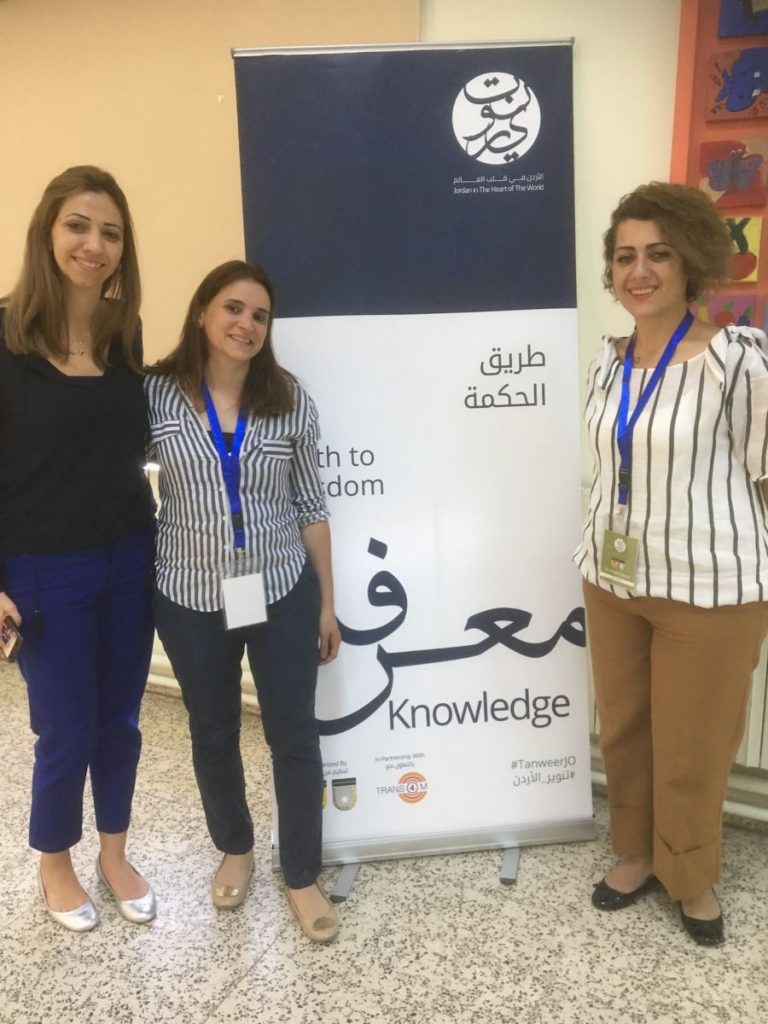 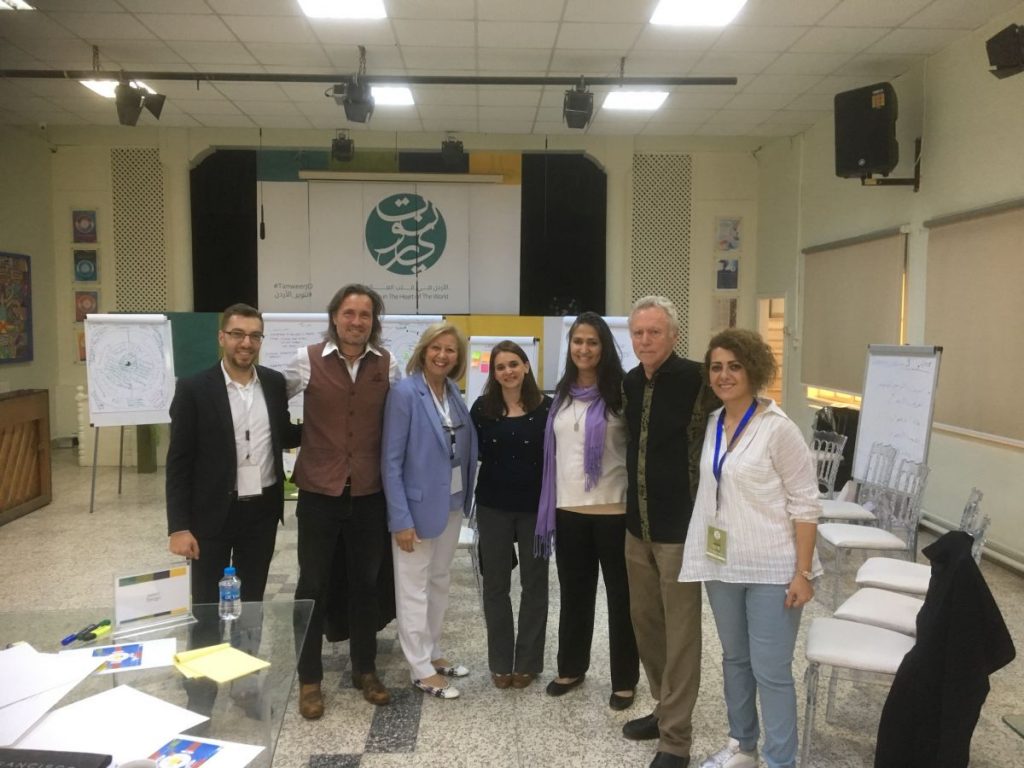 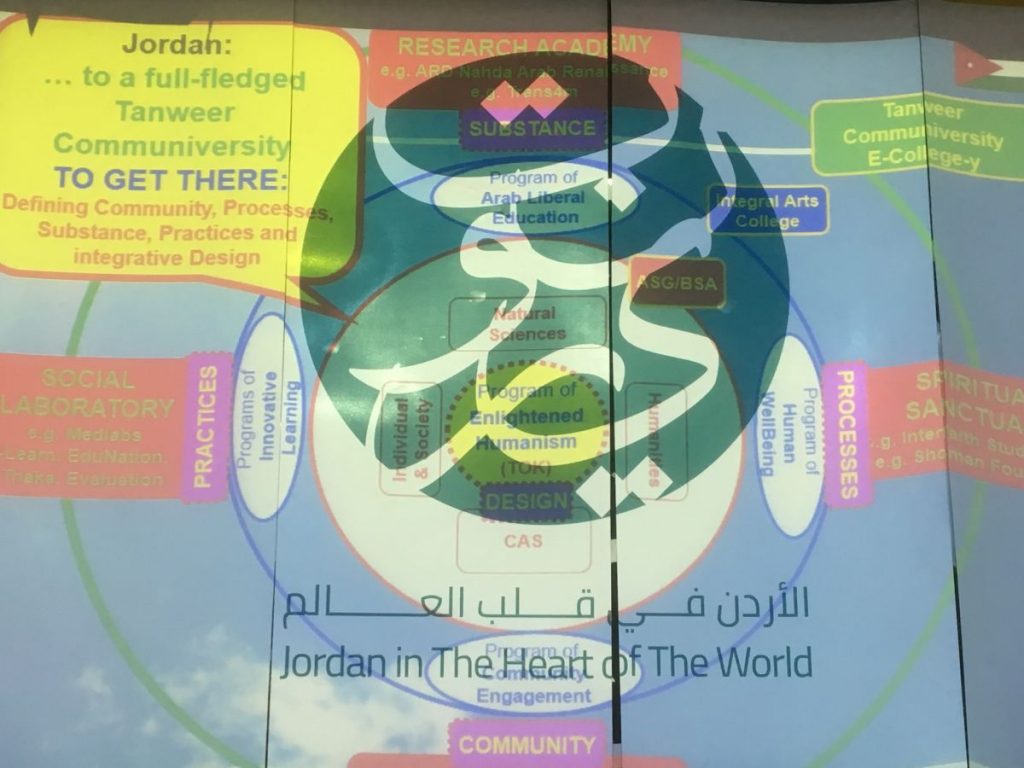 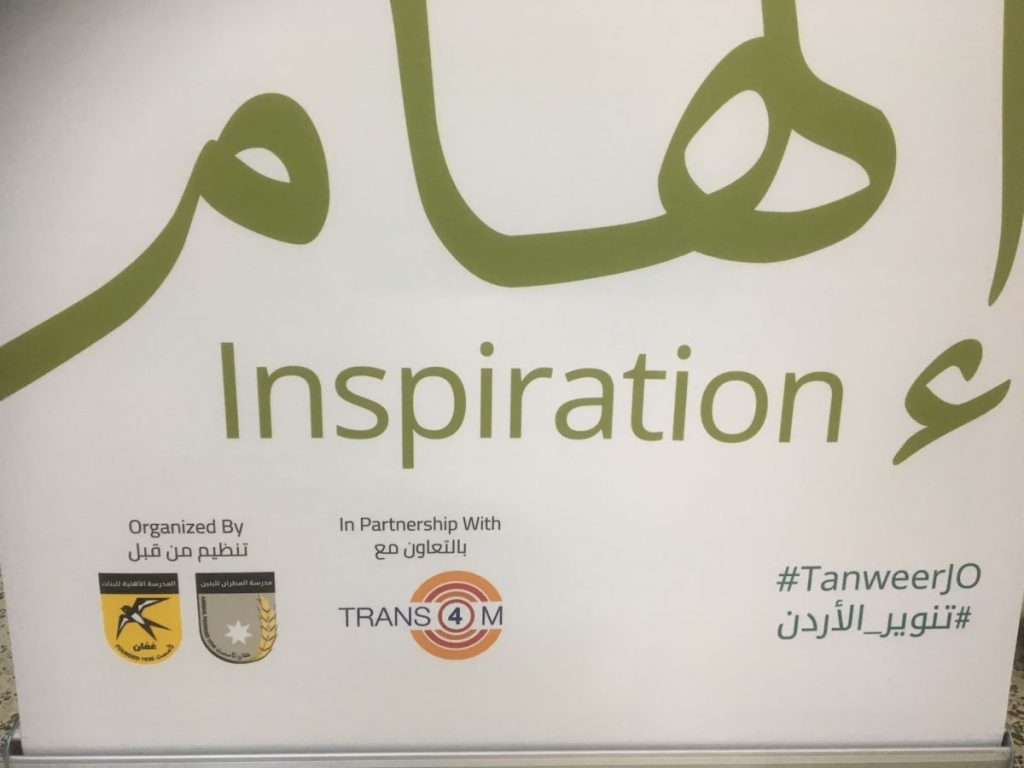 « Integral Dialogue and Integral Arts Laboratory at Trans4m’s Home for Humanity » Sekem in Egypt Reloaded: Successful PhD of Max Abouleish turns out to be Milestone for the renewal of Sekem’s approach to Integral Human Development