Akhuwat (“Brotherhood”) in London: Trans4m invited to panel on the role of Islamic Finance & Economics in alleviating poverty

15 June 2017: Trans4m was invited by Aneeqa Malik of Loop Management, a bridge building organisation between the UK and Pakistan, to participate in a panel at the Courthouse Hotel in Soho, London, focused on the role of Islamic Finance and Economics , and in particular on Pakistan’s Akhuwat role in alleviating poverty. Akhuwat, alongside Grameen, is the most renowned – in the former case non/interest – bank in South Asia.  Unlike Grameen, it does not charge any interest in lending money to its hitherto impoverished borrowers. Not only that but each loan made is thereafter recycled to create an economic multiplier in the local economy.  Aligned with this innovative approach, is a significant involvement of local mosques in Pakistan in the financial and social scheme, a purposeful deployment of volunteerism to foster a spirit of brotherhood, and non-discrimination in building up a solidarity economy, south-eastern style. Akhuwat in Pakistan, represented on the panel by its founder Dr Amjad Saqib, depicting brotherhood, is poised to extend its reach into Uganda in Africa, thereby encompassing east and south, respectively, Islam and Christianity. 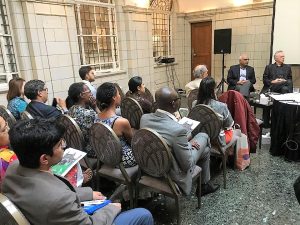 Alongside Amjad on the panel was Ismail Jeilani, founder of Satifs in the UK, which has established a crowdfunded non-interest student loan scheme, building on a uniquely developed technology platform. As Ismail said : “We are all faced by social barriers that prevent us from reaching our full potential. Before Satifs was founded, my own barrier was in the form of paying university tuition fees, alongside the thousands of other students in the UK. Whilst this is a significant issue, there is a lack of entrepreneurship and ambition amongst young people which defines a greater underlying problem. Since then, Satifs has evolved into an engine which drives social change amongst young people, encouraging entrepreneurship, discussion and meaningful education”. 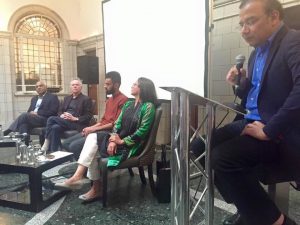 Aneeqa Malik herself, who coordinated the workshop, as a longstanding Trans4m Pakistani-British associate, is currently writing a book together with Dr. Saqib, for our Routledge Innovation and Transformation series,  on Akhuwat, and in the process is recasting the whole notion of “entrepreneurship”,  thereby drawing on the indigenous Islamic notion of “Hijra”, to portray the migration – often associated with itinerant entrepreneurs – not only of the body but also of the soul, likened to the prophet’s journey form Medina to Jerusalem. This enterprising journey, in the context of Akhuwat (“brotherhood”) is a collective, rather than an individual, one, reflecting the communality of the culture. 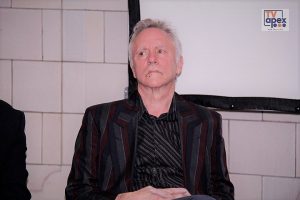 All of the above, as revealed by Ronnie Lessem at the workshop is resonant with what Trans4m, in their book on “Integral Economics” refer to as a “Developmental Economy” explicitly based on culture and spirituality. To the extent that Akhuwat and Satifs are immersed in Islamic culture and spirituality, albeit mediated by Pakistani and British cultural influences, such a developmental economy transcends the bounds of microfinance, as invented in the west, and brings the solidarity economy to another level, to the extent that it is specifically imbued with a particular form of Islamic – combined with Pakistani and British – culture and spirituality. Thereby, these significant entities, Akhuwat and Satifs, are serving to establish an authentic “south-eastern” alternative to the dominance of the “north-west” in neoliberal economic terms.

Ultimately, what we are seeing in Aneeqa Malik’s terms is a true migration of the world soul, analogous to that historically from Medina to Jerusalem in the seventh century, currently from New York to London and Lahore, in the 21st century, in a way that represents the transcultural heritage that both these cities represent. It thereby serves to lift economics form its barren neoliberal ground, to establish new grounds of liberation ultimately for the whole of the world. In this process, we are also taking forward the great legacy of Dr Ibrahim Abouleish, founder of our integral partner organization Sekem in Egypt, who departed on the same day as this workshop took place. This great Muslim soul, to whom we respectfully alluded at the workshop, stated, in his book on “Sekem – Cultivating a Sustainable Community in the Desert” that “there is nothing more powerful than the invisible net of life, which connects people with their hearts.  Its fabric is woven deeper than our understanding, and long before we first shake a hand we have moved along its threads.   The nest of life is more real than the most dangerous weapon, and unattainable for all outer violence. Only from it can real peace radiate. He or she who counts on its effectiveness is practising the most effective form of social art, because without using power or thoughts for advantage, (s)he can trust (s)he will be carried by her or his energy and endurance. To learn to see the threads and to be able to form them determines the art of social networking”. Alias brotherhood.

The renowned Canadian social activist Naomi Klein, best known for her Shock Doctrine, where she argued that the prevailing neoliberal consensus thrives on “exploiting shocks”, ranging from the dictatorship of Pinochet in Chile to hurricane Katerina in the USA, in her latest book, post-Trump, has revealed the horrors of Trumpism. In portraying the results of a recent convention held in Canada, with fellow activists, what they concluded was :

“Listening to the stories – workers being laid off after a lifetime of service, immigrants facing indefinite detention under deplorable conditions, indigenous knowledge and culture ignored and attacked – it was clear to all of us that this is what a system addicted to short-term profits and wealth is structurally required to do: it treats people and the earth either like resources to be mined to their limits or as garbage to be disposed of out of sight, whether deep in the ocean or deep in a prison cell. In sharp contrast, when people spoke about the world they wanted, the words CARE and CARETAKING came up again and again – care for the land, for the planet’s living systems, and for one another. As we talked that became a frame within which everything seemed to fit: the need to shift from a system of endless taking – from the earth and from one another – to a culture based on caretaking, the principle that when we take we also take care to give back. A system in which everyone is valued, and we don’t treat people or the natural world as if they are disposable.”

And so said all of us at this most commemorable workshop. 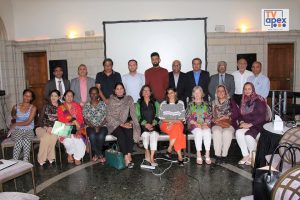 « Commemorating Ibrahim Abouleish: An Integral Giant has left us » Medlabs in Jordan: Activating the Integral Enterprise through CARE Circles