4 May 2017: Father Dr. Anselm Adodo’s new book, subtitled “Communitalism as an Alternative to Capitalism” and published in the Routledge Transformation & Innovation Series, has been well received in Nigeria and across the globe.

The book was presented to the public at the OFIRDI office in Lagos with the caption: ‘New perspectives in  African Development: Daring to think and act outside the box!’ . 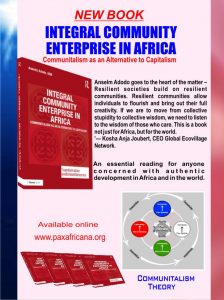 During the inaugural OFIRDI workshop which took place on the same day, participants acknowledged that Nigeria, indeed Africa, need to re-examine the issues of development, empowerment and transformation critically. The participants noted that unemployment is a rather recent problem in Nigeria and Africa. Right up till some 30 years ago, most African countries did not have unemployment problems because the sense of community was still strong. It was observed that in local communities, unemployment did not exist because everyone cared for each other. The breakdown in community life, community living caused by neo-liberal capitalism  and industrialisation, with its over-emphasis on acquisition of capital resulted in the breakdown of society harmony. In the words of Father Anselm Adodo, who is also a Senior Fellow of Trans4m: “In communities, people care for one another. In neo-liberal capitalism, people also care but they only care for their own comfort and profit, which translates into an I DON’T CARE attitude in real terms.  Could we then say that community, not industrialisation or technology, is the best solution to Africa’s development problem?”

« Caring for a World in Transition: Trans4m contributes to 3rd Spirit of Humanity Forum in Iceland » Jean Parker introduces the Integral Worlds and CARE approach to Ethical Business Building the Future