Integral Healing in (and for) Nigeria and Africa
by Anselm Adodo, Pax Herbals and EDEMCS

Father Anselm Adodo, Founder of Paxherbals in Edo State of Nigeria focuses, together with his team of co-researchers of Pax Herbals and Ewu Village, on a holistic approach to enterprise-in-community as well as to healing, leading to the foundation of a new research centre and a community development association, including thousands of local villagers.

The burning issue underlying this research-to-innovation is the neglect of indigenous African knowledge, most especially indigenous medical knowledge, in favor of a one-sided western exogenous knowledge system which led to an identity crises and a loss of interest in traditional culture and values among the rural population of Edo state and Nigeria, as well as to impoverished economic and political institutions.

Innovation Ecosystem: A highly engaged local Team, spanning Enterprise and Community, including the local King as a Steward

From the outset, Father Anselm built up a strong innovation ecosystem, comprised of key local and global figures engaging with him in a co-creative process to address the issue at hand. It included transformation agents within Pax Herbals and within the local Ewu village. The King of Ewu acted as a steward for the entire process. Over time, this ecosystem grew into close institutional partnerships that included Pax Herbals as an enterprise, the Ewu community and a newly developed community association, Father Anselm’s monastery and Trans4m (catalyzing the overall innovation process). At a later stage, the Lagos-based integral center CISER as well as the University of Ibadan joined this process.

Integral Research was used as a transformative process to bring about integral healing. Drawing upon Trans4m’s Integral Worlds model, Adodo adopted a holistic way of research and social innovation that is built on the interaction between the four worlds of the South (nature), East (culture), North (science) and West (economy). Father Anselm combined Participatory Action Research (PAR) and Co-operative Inquiry (CI) as his action research methodologies. Through his research, he activated processes of integral renewal within his enterprise (Pax Herbals) as well as within the local community (Ewu). Regular dialogue sessions helped to identify challenges, and find a common ground to effectively proffer their own solutions rather than drawing on solutions from without.

Communitalism affirms that some aspects of capitalism, such as individual inventiveness, are worth pursuing and supporting, but such inventiveness must be put at the service of the community, so that both the individual and the community prosper. The key philosophy of communitalism is ‘we are either happy together as a prosperous community or unhappy together’ and thereby unprosperous. For communitalism, the health and prosperity of the individual cannot be separated from the health and prosperity of the local community. Global health must start from local health, not the other way round. In the process the link between individual, community and enterprise health and whole-making will be made. Communitalism demonstrates that an institutionalized model of business and enterprise based on nature, community, spirituality and humanism is a better driver of social and technological innovation in Africa.

Integral Impact: A vibrant Community Association and a new Africa Centre for Integral Research and Development

Father Anselm and his team’s research-to-innovation led to the creation of Ewu Development and Educational Multipurpose Cooperative Society (EDEMCS), enrolling thousands of local villagers. From a local group of marginalized and underrated people, EDEMCS is becoming a voice powerful enough to challenge the status quo, and to ‘force’ a change in power relations in Edo state and Nigeria. In the CI group, Anselm introduced Heron’s four epistemologies, or “ways of knowing”, namely experiential knowing, imaginal knowing, propositional knowing and practical knowing. One of the practical transformative contributions of the CI group is the creation of the Africa Centre for Integral Research and Development (ACIRD), which aims to institutionalize knowledge creation in and for Ewu village, Edo State, Nigeria and Africa as a whole via “communitalism” as a new African integral theory. 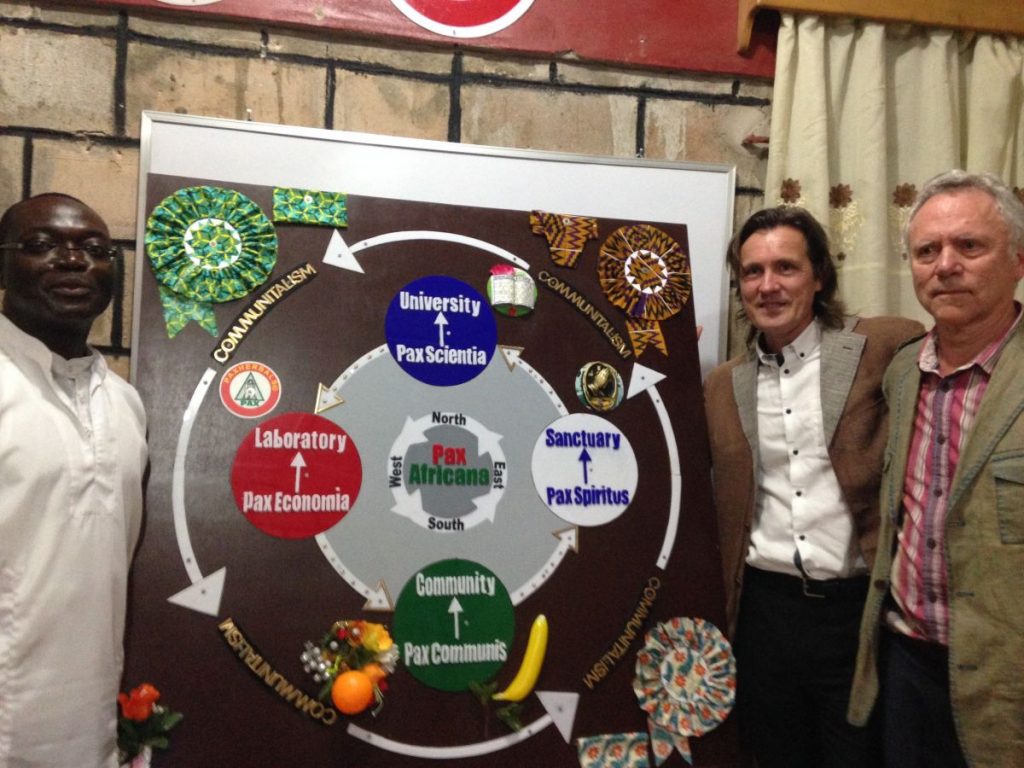 The Communitalism model, as presented at the final VIVA and at the subsequent presentation to and with the Paxherbals and Ewu Community 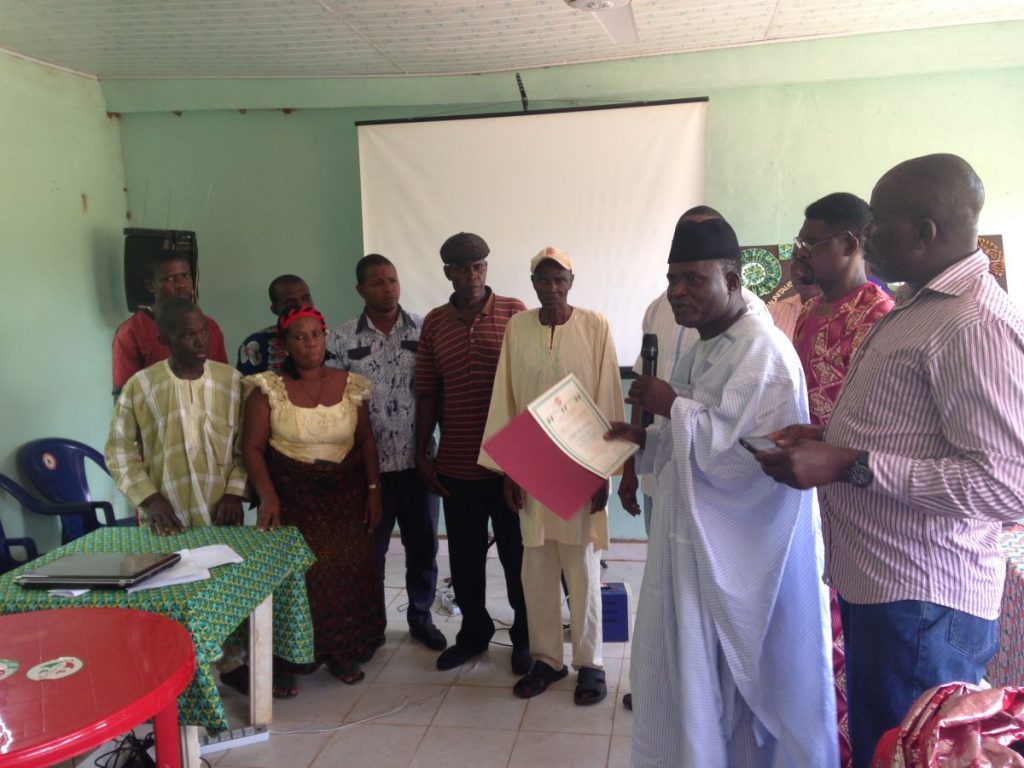 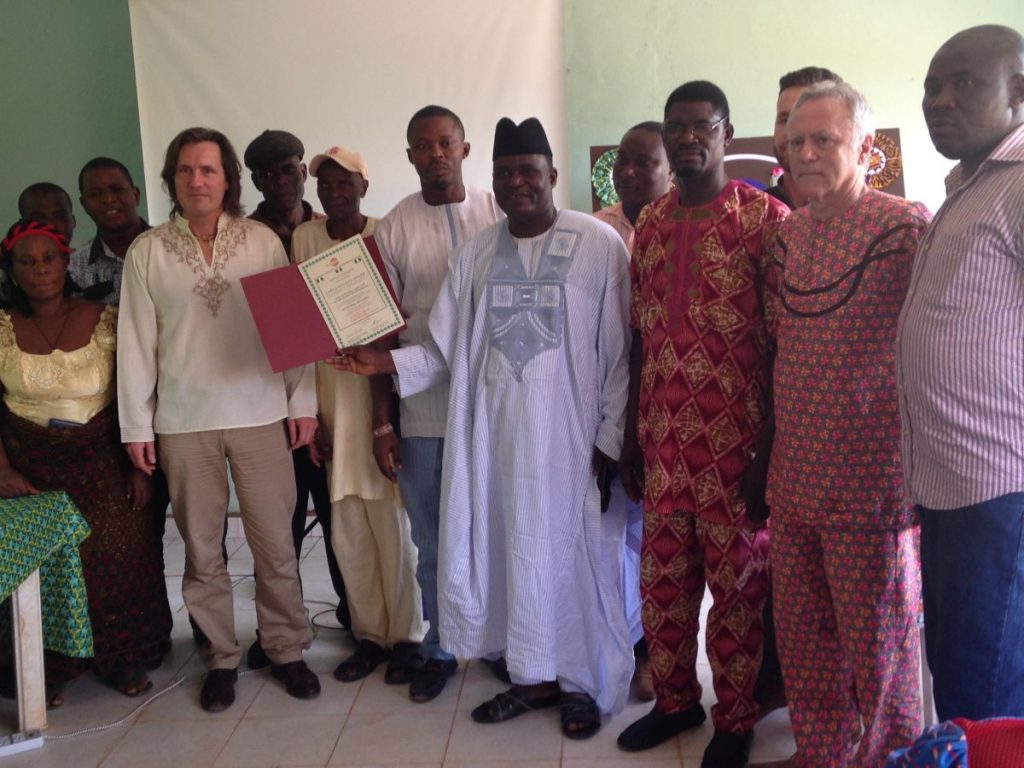 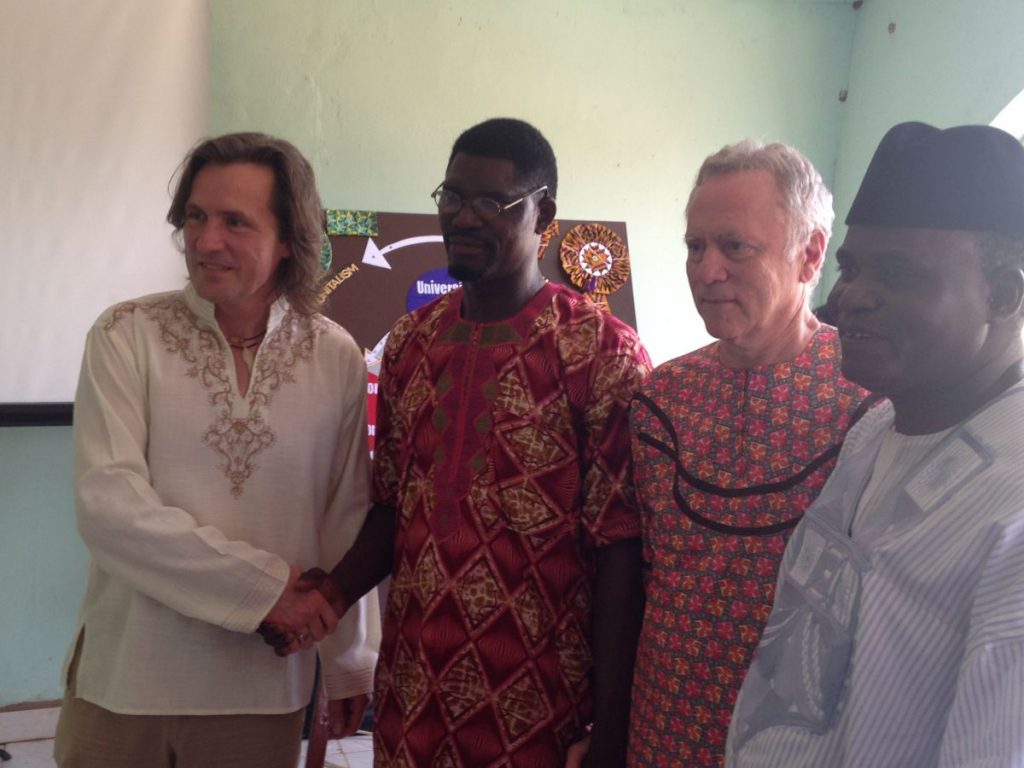 Celebration of CARE AWARD, with EDEMCS president and treasure

“My Industrial Training experience at Paxherbals changed my orientation to knowledge and science and enabled me to see the link between nature, science and community.“

“I love the holistic approach to healing as it is practiced at paxherbals. It reminds us that we not only need to take care of our bodies, but also be concerned about our minds, environment and communities.“

“That I am able to fend for myself and my family today is because of my business dealing with Paxherbals to whom I supply roots and herbs. Their business enterprise is beneficial to me, the community and the whole country as well. I want to remain a part of their enterprise.“

“I am happy to be a part of EDEMCS. I feel a sense of belonging and appreciated. Even though they gave me a loan to improve my business, I don’t feel like a beggar. They make me feel more committed to my work and also to think of how my business can benefit other people.“

Mrs. Esther Otoide, a beneficiary of micro-finance loan from EDEMCS.

Razak Ojeifo III, King of Ewu Kingdom on the Inauguration of EDEMCS