6 November 2018: Re-STORY-ing Peace turned out to be a highly engaging and transformative Panel during “Geneva Peace Week”, an annual week-long event co-hosted by the United Nations and the Geneva Peacebuilding Platform, offering a vast array of panels, performances featuring hundreds of eminent academic, diplomatic and non-governmental speakers. 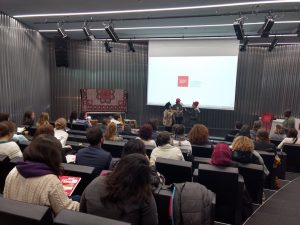 The panel on “Re-STORY-ing Peace: Arts, Storytelling and Transformation” was hosted by The Conflict and Human Rights Initiative, a student-led association of the Graduate Institute of Geneva, and the Enacting Global Transformation Initiative, at the Centre for International Studies, University of Oxford. It was designed as a participatory Presentation-Performance-Dialogue, and moderated by Moritz Neubert from the Conflict and Human Rights Initiative, Geneva.

The panel attracted a wide and diverse audience of over 50 to 60 people ranging from academics, students, non-governmental peacebuilding organisations and UN and international organisations, with a direct interest in the role of art and culture in peacebuilding. 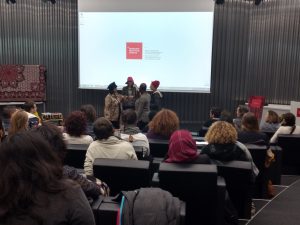 The session was powerfully opened by a transformative performance by four female graduate students, prepared in collaboration with the Enacting Global Transformation Initiative. The graduate students, Erin Brewer (USA), Tanya Kini (India), Ebunoluwa Iyamu (Nigeria) and Sophia Simmons (USA/Israel) evocatively enacted two poems from The Gift of Peace  by Rama Mani and artist Bill Kelly. The first, The Manual of Instructions of Genocidaires, depicted with stark sobriety and dry humour how warlords plan mass atrocities by crushing culture and values; the second ‘What If’  poignantly evoked the possibility of reconciliation between warring factions. Bringing the interactive Theatre of Transformation methodology to life, the students concluded their performance by sharing their personal testimonies and visions for transformative peace, then invited the moderator, speakers and all participants to express their own stories and visions for peace. 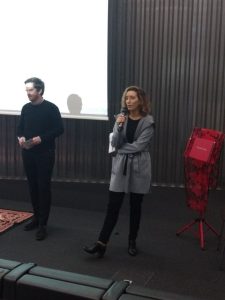 The panel now began, featuring trans-disciplinary Academic-Activists invited to share how they have engaged with art and culture to bridge theory and practice and build peace and development with local populations in war-torn and transitional societies in Africa, Asia, Latin America, and the Middle East.

First, Elena Butti, Anthropologist and doctoral candidate at the University of Oxford, and Steering Committee member of the Oxford Transitional Justice Initiative began with a cogent film-cum-presentation. She presented the trailer of the collaborative film entitled ‘Somos’ which she made with Colombian war-affected youth as part of her doctoral research. She explained how for her film became a way to engage youth by meeting them on their terms and speaking their language, and enabling them to give their own voices and their own narratives. She also analysed the impact the film had had on the involved youth, on Colombian society and on global audiences, and the potential of using film as an inclusive participatory and empowering methodology in research for peacebuilding. 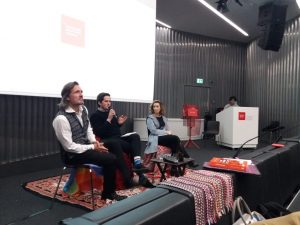 Trans4m’s co-founder Alexander Schieffer followed the inspiring presentation-film of Elena Butti, and shared how storytelling, culture and art are central to effect transformation in Trans4m’s Integral Worlds approach, whether in working with PhD candidates, undergraduates, or organisations around the world, primarily in transitional, post war and war-torn societies. Schieffer shared a number of stories from the PhD driven research-to-innovation journeys his organisation Trans4m is accompanying around the world. Fascinatingly, to tell these stories, Schieffer eschewed the usual powerpoint presentation that academics use. Instead, he had prepared an exhibit of multiple cultural artefacts that had arisen from each research-to-innovation journey, and that symbolized the culturally-rooted re-STORY-ing underlying each research-to-innovation journey.

Taking the participants on a global journey of peacebuilding and development across diverse post-conflict, transitional and conflict-affected societies Trans4m currently works in, Alexander Schieffer briefly shared the following stories:

Jordan / Middle East: Through the PhD journey of Manar Al Nimer, Vice President of MedLabs, in Jordan, this company of medical laboratories transformed itself into an integral enterprise with the core purpose of healing societies across the Middle East, in a transformative journey in which all employees of the enterprise participated and continue to engage. The PhD journey was represented by two artefacts that have been adopted as core symbols by the enterprise: a CARE-lamp, and a four-branched Olive Tree, representing the four dimensions the Integral Enterprise. 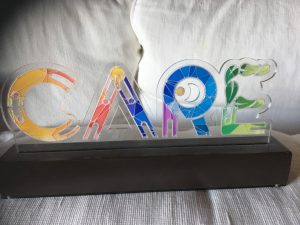 Zimbawbe/Southern Africa: Brigadier Abel, a former Freedom Fighter who founded a Peace-and-Security Enterprise in Zimbabwe used his PhD journey to shape his life purpose to contribute through his company to creating a peaceful new Zimbabwe. He represented his PhD Journey with a Baobab Tree, as a symbol for nourishment and shelter, at the heart of many African stories

Zimbawbe/Southern Africa: The Integral Green Zimbabwe community, whereby over 12 of Trans4m’s Zimbawbean PhD innovators combined their individual narratives into a new societal story. Published as a co-edited book in  the Routledge Innovation and Transformation series edited by Trans4m, entitled Integral Green Zimbabwe: The African Phoenix Rising, the book itself is a collective symbol of these diverse Zimbabweans aspiration to re-STORY their society despite acute and chronic political upheaval.

South Africa: Loshnee Naidoo, is a community developer, daughter of a prominent South African Freedom Fighter, and herself an activist for the liberation of women in post-conflict South Africa. Her PhD research-to-innovation journey shaped an integral empowerment model for battered women stranded in shelters. Her cultural re-story-ing symbol is a powerful black and white graphic artwork expressing the liberation of women as a collective movement. The artwork was made by Loshnee’s artist friend and co-re-STORY-er Sanna Shakuntula, an 83 year old artist and educator deeply engaged in the anti-apartheid movement and peacebuilding struggle. 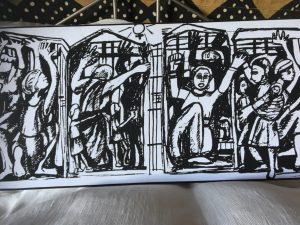 Nigeria: Father Anselm Adodo, a Nigerian Benedictine monk and peacebuilder, who turned the African Natural Medicine enterprise that he founded into a force for peacebuilding among religious and ethnic groups of Nigeria, and healing of society – an Enterprise that is called PAX(Peace)Herbals. The two cultural symbols presented to capture his re-STORY-ing process is the PaxHerbals’ first product, their cough syrup, a culturally rooted remedy, and Adodo’s book on Integral Enterprise in Community, presenting a new model for peacebuilding and development for Africa. 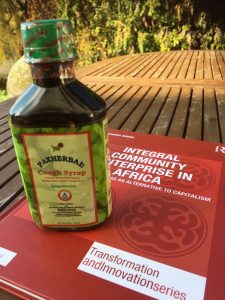 Sri Lanka/Asia: Sarvodaya is a Sri Lankan development, peace and reconciliation movement that developed, together with Trans4m, a culturally rooted integral model to encompass their multifaceted work as the war-torn country’s leading non-governmental organisation spread across Sinhala, Tamil and Muslim regions of the entire country. The cultural symbol encapsulating this is a four-petalled lotus – integrating political, economic, cultural-spiritual, and ecological peace and development. This lotus captures their aspiration to re-STORY Sri Lankan society through such a new cultural image, and transformative educational institutions to rebuild peace after decades of division and continuing unrest. 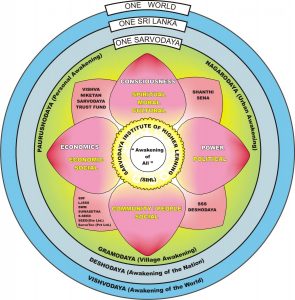 (The final invited speaker Rama Mani, founder of Theatre of Transformation Academy and Convenor of the Enacting Global Transformation was unfortunately absent due to illness, but her presence was felt through the collaborative student performance and advance preparation of the panel with all the co-organisers.)

These presentations struck a chord in the audience and stimulated a vibrant round of sharing and questions from members of the audience. The experiences shared and questions raised were highly thought-provoking and led to rich discussion, as many of the participants present had significant experience in activating culture and the arts, particularly theatre and storytelling, in their own peacebuilding work in different regions of the world.

In conclusion, to ensure that every single person’s ‘story’ was included, the moderator Moritz Neubert invited each participant in the audience to share in writing his or her vision for peace and the role that art, culture and storytelling could play to expand the impact of this vision in building peace. This resulted in a collaborative collage of creative statements opening the space for ongoing dialogue, that the two host organisations, Geneva-based Conflict and Human Rights Initiative and Oxford-based Enacting Global Transformation Initiative are jointly committed to continue facilitating.

This highly creative Panel-Performance-Dialogue confirmed that the activation of art and culture, and the power of story telling, theatre and film can serve both to create inclusive and collaborative pathways for peacebuilding, and to ensure that the impact on conflict-affected communities is both transformative and emancipatory, by ensuring that they re-story their own lives, cultures and societies. 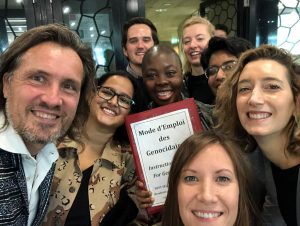 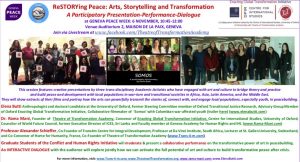 « Becoming Agents of Transformation: 25 Students from the University of St. Gallen at Home for Humanity » Towards an Integral Academy for Learning and Innovation: Workshop with MedLabs in Amman