29 September 2018: Benjamin Foro graduates with an outstanding research-to-innovation on establishing the Integral Enterprise Nostras in the Swiss Canton of Valais, together with a group of friends and co-creators 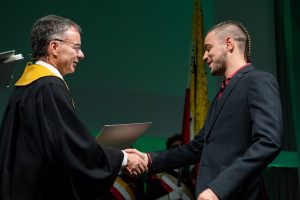 Nostras, which translates into “from our land”, is a new Integral Enterprise on the Swiss horizon, born out of the research-to-innovation process that Benjamin Foro underwent together with his co-founders. Grounded on the principles of permaculture, Nostras focusses on hemp related products, utilizing the brand “B-Chill”. The core mission of Nostras goes well beyond economic sustainability, but is rather about becoming a force for cultural renewal, identity building and knowledge creation in the Swiss mountain canton of Valais. Benjamin Foro and his team were actively supported by Maxime Bertocchi, another Trans4m Junior Fellow, who served as an “integral mentor” in the process – thereby enabling maximum knowledge transfer among the Junior Fellowship..

The graduation of Benjamin Foro was a milestone for the entire Nostras team that, after the successful set up of the enterprise, is now focussing on delivering on all its integral objectives.

Father Anselm Adodo from Pax Herbals in Nigeria and Maximilian Abouleish-Boes from Sekem in Egypt, both protagonists of leading Integral Enterprises, acknowlede the value of Foro’s bachelor research and the significance of this emerging enterprise-innovation for regional development, as follows:

“Coming from Africa, representing one of the much neglected parts of the world, and having interacted with Benjamin through Skype discussions as a student, and having read his thesis, I acknowledge the originality of his work. The Integral Worlds research approach employed in this system is a potent tool to help repair the global edcucational system, an offshoot of capitalism, which obviously needs fixing. Benjamin’s work is a model of how education should not just be about acquiring degrees, but about making an impact in one’s community. I have introduced Benjamin’s work to my own students as an example of action research and holistic education. Great work.” Father Dr. Anselm Adodo, Founder of Pax Herbals, Nigeria and Initiator of the African Action Research Group

“This piece of work is more than a Bachelor Thesis. It is an expression of a new generation that does not envision less than building up a new economy based on the concept of an Integral Enterprise. I wish this group of integral entrepreneurs the energy and persistence to carry this impulse forward – even if it takes more than 100 years.” Dr. Maximilian Abouleish, Chief Sustainability Officer of Sekem in Egypt

CONGRATULATIONS TO BENJAMIN AND THE ENTIRE NOSTRAS TEAM 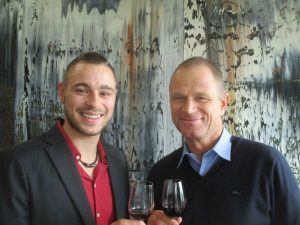 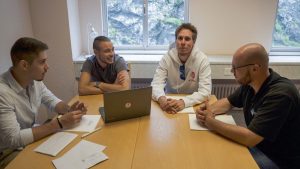